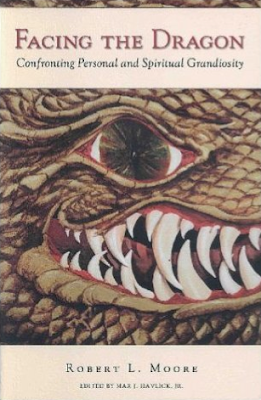 Well, after all those kind comments you alcoholic bloggers left for me in the last post, I think I'm going to have to do buy this book, and commit it entirely to memory :)
..no, seriously, this book does appeal to me, but I confess I haven't read it yet.
Its called: Facing the Dragon: Confronting Personal and Spiritual Grandiosity

Personally, I think the ego is extraordinarily insidious. Never really goes away. Best you can do, is learn to tolerate it gracefully. Some people, do manage to have very impressive absence of? Ego. Not nearly enough unfortunately.
There is that whole, "false humility" thing, which I find a little bit distasteful. I'm not very good at tolerating it, because I find it embarrassingly transparent. If it was less obvious, then it wouldn't bug me so much. But as it is, it's sort of stands out like a sore thumb, and it's very difficult to not notice.

Also, this subject has significance for either someone with long-term sobriety, or someone with less sobriety who is able to enjoy a high standard of of emotional stability, for want of a better word. When I say emotional stability, I don't mean that they somehow experience that sort of "flat line" emotional life. What I mean is, that they don't take their emotional state personally. Meaning their relationship to their varied, unpredictable, and conflicting states, is "no big deal".
And of course, this applies to all those that by default have a confident demeanour, and a tendency towards complacency.

Personally, I find when things are going well, that's the time I'm most likely to get lazy and complacent. So success for me, is a sort of minefield. You'd be surprised how easy it is to wreck things, by just letting things slide. So, the more success you experience, the easier it is to become complacent. Well that's what I find anyway.

So, I think this book looks quite promising. There is nothing more unattractive than grandiosity. And how easy! it is to think oneself slightly better than the next man, especially when the next man is in a particularly sorry state, for one reason or another. Like someone said, "it's easy to love the lovable ones".

I must admit, I find those things I learned from having to deal with success of one sort or another, quite interesting. Because so much of my life before was about failure after failure. So, I never really had to learn how to be responsible when good things came my way. Now I am in a fortunate position in many ways, life is a lot better than it was. I have more luck than I deserve. And yes, in this impermanent world, nothing is certain. "This too shall pass". The good things pass, and the bad things pass. But in the past all I had was lots of bad things. At least, that's the way it seemed. I daresay I have a slanted perception of my past, so they that may not be entirely accurate! But yes I became very good at different forms of crisis management. Whereas now, my challenge is to maintain the good things, so that I do not allow them to slip through my fingers. Nor hold on to them so tightly, that I squeeze the life out of them. And this is an entirely new lesson. For me.

So anyway, it I just thought I would mention this book, because us alcoholics are a bit ! weak on the ego front. Even those of us who consider ourselves to be uniquely awful. ..So much so that we are 'special and different', in a worse way, than other aa's. Which is bull.

Right I'm off. And thank you so much for your kind comments on my birthday. If I'm honest, compliments make me slightly uncomfortable, As I subscribe more to the Kipling review of criticism and compliments From be poem called if

If you can meet with triumph and disaster
And treat those two imposters just the same;

Meaning I think of both criticism and compliments as imposters. Because neither of them tell the whole story. And no matter how nice the thing you are telling me is, I know that there is another side to that. And that feeling never really leaves me, so on the one hand it is only polite to say thank you, but I don't feel as though I am a better person because I have those compliments. the nagging reality of my varied nature is all too apparent, unfortunately. I don't mean that in a disparaging sense, because I wholeheartedly believe that all humans contains shades of light and dark, so when I say that, it has no 'good' or 'bad' meaning. it's like saying 'I am just like you'. So there is no sense of shame or criticism, for me when I think those thoughts.

One thing I like about long-term sobriety, if that every now and again, life pulls you up short, in no uncertain terms, and lets you know absolutely that you don't know everything. So I kind of know that a moment that feels just like that, lies ahead. And that's why it easier to not take success or failure personally, and to see it all as shades of experience. Neither good nor bad. Right or wrong.

There I go again. I had every intention of writing a very short post. Just mentioning the book and the author and leaving it at that. Typical.
Well have a fabulous day, wherever you are :)
Posted by An Irish Friend of Bill

I've just learned to say Thank You and if I get the occasional compliment, then I take it for what it is and say Thanks. It must be my southern upbringing. Less is more in many ways.

The book looks great, I'll have to get it at the library. This is a good post; like Syd I like to say thank you and move on, no attachment to it, and when folks are nasty, same thing...no attachment to it. I do this only so often as I am very human and still have my character defects. Thank you for your blog.