Orbs heading for the church bell tower at midnight 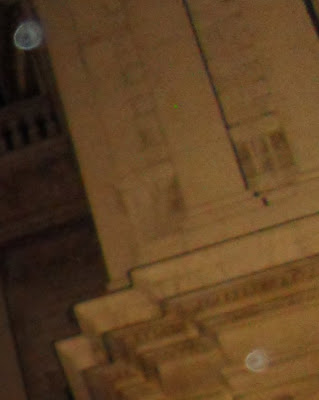 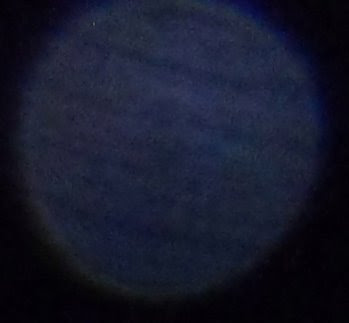 If you do a google image search for Orbs, you will see lots of images just like this. White round things. Some big some small. They are actually rather common and show up in photos. I was randomly photographing a church while on my way through town and a load of them showed up on my pictures. I can never see them through the viewfinder, but become visible when you see the pics properly later. Normally I don’t see them in pics I take. I’ve seen them show up on friend’s pictures. I don’t think they mean something ‘special’. I think they’re just random.
But anyway I was happy to catch some as I was making my way though town as I randomly stopped to photograph a church. I will have to go back and see if they show up at the same place every midnight. (!)
Spooky huh? Well not really. Well I don’t think so. I like them. I like having visual reminders of ? dimensions I am not able to see. I know loads of ‘stuff’ is out there but I can’t ! see it. ..I’m not sure I want to, to be honest ☺ My church pics are full of these blobs, all different sizes, but I included these ones as they were pretty dense.
It only occurred to me later that their movement is towards the bell tower which is about to strike midnight. The second picture was of a bigger one at the front of the church just as the clock bell tolled midnight. Cool.

“We feel as though we had been placed in a position of neutrality—safe and protected.” (p84, AA Big Book)

..And for those of you that have not yet reached a point where you feel like that and are a bit freaked out by the pics..
“Keep on the firing line of life with these MOTIVES and God WILL, (not might) keep you unharmed.” (p102, AA Big Book)
Remember, Do good ‘stuff’ and good ‘stuff’ happens right ! back. Well that’s what I think..

I have a busy Sunday. One (apparently) very easy exam paper, another admission test paper to submit monday and a difficult 2000wd application form for monday. And its REALLY hot here.. I will just have to drink TONS of tea :)
Have a lovely Sunday !
Posted by An Irish Friend of Bill

wow, i've never seen these things before or heard of them :) Its like the heatwaves you can see in a shadow sometimes or through a window, like you say there is another dimension... did you call ghost busters?

I heard of them a while ago and then I saw first hand people capture them in photos so i knew it wasn't a hoax. Im sure there is no shortage of faked pictures on the internet, but they are surprisingly common so you are bound to see some eventually if you take photos regularly. I just got a new camera have only just started using it. before i just used my dodgy ol mobile to take pics. they often turn up randomly in rather ordinary looking buildings during daylight but in theory they are more likely to show up in ? 'religious' (i use the term loosely) places. sometimes you see the same shape orbs following a person to different locations. they all look slightly different. a bit like a nucleus made up of light. i think they are quite cool. i don't find them scary at all.

i'd like to become an orb one day ... go interesting places you never got to as a human

being a bit ! geeky with photos, i found the color separations interesting. firstly, they do not convert well to alternative channels. ie from RGb to any other format. say cmyk or index. the detail reduces considerbly. (of the orbs that is)
plus. the blue channel shows a ? phosphorescent trail of fuzziness that are not visible in the red and green channels. i wonder why the blue shows movement and the other two do not? weird huh?

I've not seen an orb before. Interesting stuff.