Sat 7th Oct!! The Empowerment of the One-Thousand Arm Chenrezig Anyone? 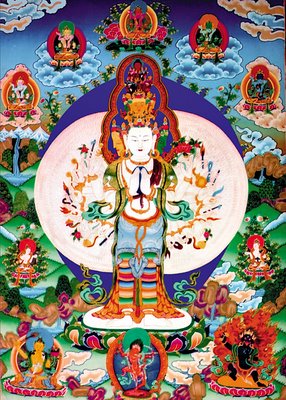 I'm not exactly an expert, (!!!) but I think this looks like an TOP Tibetan Monk. A SENIOR Tibetan Rinpoche Is doing an 'entry level' Initiation this weekend. Right on our doorstep!! Anyone fancy it?? ..SO much nicer than hiking all the way over to Nepal or India to do these things...
Don't worry if you don't understand it. I don't think anyone does. Properly anyway. But initiations are REAL and connect you to the ?? Being in question. As far as I know. They are very 'dense' teachings. Who knows how these things work? But the way I see it, it doesn't do you any harm.
When a Senior teacher like this shows up, its always packed out, so TRY to get there a bit early. Expect it to fill up.
Also a lot of monks and nuns show up to take the initiation, so meeting them is always a pleasant bonus. If you manage to get to speak to them.
We are SO lucky that SENIOR pals of his Holiness teach cool stuff a stones throw away.
By the way, they don't have these type of people round to teach very often. One or two times a year. They are not very expensive at all to do either.
!!! Very exciting!

This is the Teacher...
Khensur Lobsang Tenzin Rinpoche
Born in Tibet in 1934, Rinpoche was ordained as a monk at the age of seven and entered Sera Je monastery at seventeen. He obtained his Lharampa Geshe degree in 1979, entered Gyume Tantric University and two years later became master of discipline.
In 1985 His Holiness the Dalai Lama appointed him abbot of Gyume, a position he held for six years. Since then he has taught extensively in India and the West.

Saturday and Sunday 7 & 8 October 2.30pm – 5pm:
initiation and commentary £80 (£50 concs.)
initiation only £40 (concs. £25)
commentary (see below) £40 (concs. £25)
• all levels •
This is about the 'Being'....
Chenrezig (Skt: Avalokiteshvara) is the embodiment of compassion and as such is so important to our lives. His Holiness the Dalai Lama is very closely connected to Chenrezig and the mantra om mani padme hum is the most revered in Tibet. Rinpoche will confer a great empowerment of the 1,000-hand, 1,000-eye Chenrezig with the five tathagatas in the system of Num Palmo (yoga tantra).
Posted by An Irish Friend of Bill